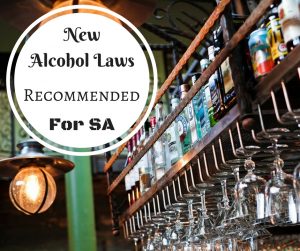 South Australia’s Liquor Licensing Act 1997 has been in place for nearly two decades. In that time, there have been substantial changes in what we know about alcohol use and its impact on people’s health and wellbeing. Specifically, there have been significant discoveries on the negative impact that consuming alcohol can have on young people, particularly in regards to their brain development. Encounter Youth has been aware of these impacts for some time, and we educate students on this topic through our Party Safe Education™ program. The South Australian Government has now taken notice of the greater knowledge about the effects of alcohol. This, combined with their desire for alcohol to play a role in Adelaide being a vibrant city, provided a reason to review the current liquor licensing legislation and implement new alcohol laws.

The review process began last year with the release of a discussion paper and Encounter Youth provided a submission and consultation in the review process. The review has now been completed and the final report recommends a total of 129 changes to the current alcohol laws. Many of the recommended changes are consistent with our recommendations. So what are the key changes that are relevant to young people and parents and what do they mean?

1. New alcohol laws should feature harm minimisation as a primary object of the new laws

Harm minimisation is a principle that “…aims to address alcohol and other drug issues by reducing the harmful effects of alcohol and other drugs on individuals and society”1. This may seem like a logical and sensible goal for alcohol laws, and that’s because it is. The current legislation, however, focuses mainly on the responsible supply of alcohol, furthering the interests of the liquor industry and ensuring the sale of alcohol contributes to, and does not detract from, the community.

The first, and arguably the most important, change that is recommended, is that harm minimisation features as a clear and prominent object of the Act. Throughout the report, harm minimisation is referenced as the overarching principle that should govern all new decisions about the sale and supply of alcohol in SA. This change may sound a bit boring, but at Encounter Youth, we are very excited about this change! The prominence of harm minimisation in the new alcohol laws will help to make sure that practical steps are taken to reduce any negative impacts of new alcohol licences.

2. Provision of alcohol to minors on a private property should be restricted

In our submission to the discussion paper, Encounter Youth raised concerns that there are currently no ‘secondary supply’ laws in SA. These laws would create a provision in the legislation restricting the consumption of alcohol by minors while at a private premise. SA and the Australian Capital Territory are the only jurisdictions in Australia that do not currently have secondary supply laws.

Through our experience of working with young people, their parents and South Australia Police, we have heard that young people sometimes use this loophole to possess and consume alcohol at parties that are held at on a private property. Many parents have expressed concern to us that alcohol may be provided to their child at a party without the parent’s knowledge. As the legislation currently stands, there is no legal restriction on a minor consuming alcohol in this situation, regardless of their age. Several parents have also expressed concern about their young person requesting that alcohol is made available at their party. Under the current alcohol laws, the parents do not have any legal reason to deny that request. Thankfully, the review has recommended that new alcohol laws close this loophole. Specifically, the review stated:

If the recommended changes are implemented, the new alcohol laws will make it illegal for a young person under 18 to possess and/or consume alcohol at a party unless a) it is supplied by the parent/guardian, or b) they have written consent from their parent/guardian. This change would give a parent clear legal reasons to not allow alcohol at their young person’s party. Additionally, if the decision was made to provide alcohol, a plan would need to be developed to gain consent from parents. This plan would need to include a clear way to see who has consent to drink alcohol, and who does not (e.g. different coloured wristbands). We believe that this change may also be significant for those parents whose young person is attending a party at somebody else’s house. If it is implemented in the new alcohol laws, parents would be able to have more peace of mind that their young person will not be allowed to drink alcohol without their knowledge or consent.

3. Alcohol should not be allowed to be sold in supermarkets

The review agreed with our position and concluded that the increased availability of alcohol through supermarkets would be contrary to the principle of harm minimisation. The review, therefore, recommended that the laws restricting the sale of alcohol in supermarkets should remain in place.

4. Alcohol advertising should be subject to further restrictions

Currently, televised sports broadcasts are exempt from normal restrictions on alcohol advertising. This issue was considered in the review process and it was concluded that “…there is merit in considering a ban on [alcohol] advertising…for live sporting television broadcasts” and argued that this should be tackled at a national level. It was also recommended “…that legislation should be enacted to prohibit the advertising of alcohol on public transport and public transport infrastructure (including bus stops, shelters and at interchanges) in South Australia.”

Having reviewed all of the recommendations, we believe that SA’s alcohol laws are changing for the better. There is a strong focus on reducing harm from alcohol, particularly when it comes to young people. As we tell young people and parents in our Party Safe Education™ program, we know that there are more young people now than ever before choosing not to drink, and are making responsible choices if they do choose to drink. If the changes are implemented, new alcohol laws in SA will help to ensure these positive trends continue – and our society will be better off for it.