New drinking laws on their way for SA [UPDATE] 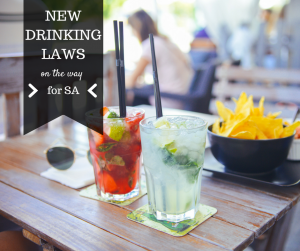 New drinking laws will be clearer and safer

The objects of the act will be revised to provide greater clarity, particularly in relation to the potential harm from consuming alcohol. Consumer and Business Services (CBS), who issue liquor licences in SA will also:

“…have a greater focus on assessing compliance with the objects of the Act, particularly licensee’s obligations to minimising harm or the potential for harm associated with excessive or inappropriate consumption of liquor.”

This means that there will be a greater responsibility for businesses that sell alcohol to ensure that they are not encouraging people to drink at levels that will cause harm. Combined with higher licence fees for ‘high-risk’ premises, there will be resources so that CBS can make sure that businesses are complying with the conditions of their liquor licences. This is excellent news! It puts the safety of patrons front-and-centre and it means that it will be in the best interests of businesses serving alcohol to ensure the wellbeing of their customers.

New licence applications will also be subject to a new ‘Community Impact and Public Interest Test’ which will replace the current ‘Needs Test’. Therefore, under the new laws, a business applying for a liquor licence:

“…will have to satisfy the Licensing Authority that granting the application will not detract from the safety and well-being of the community and is in the public interest.”

This means that new licenses will need to prove that the new licence will not make an area unsafe and that the benefits to a community outweigh the potential harm from the supply of alcohol. Again, this is very positive news because the new test emphasises safety and wellbeing as higher priorities than the current ‘Needs Test’ does.

2. There will be greater restrictions on underage drinking

The new drinking laws will make it significantly more difficult for minors to access alcohol. For example:

These changes put greater power and responsibility in the hands of parents to approve (or disapprove) the provision of alcohol to their children.

There will also be changes to the penalties that licensed premises face if they supply alcohol to a minor. Basically, if they are charged with providing alcohol to a minor, they will need to prove that they did not commit the offence, rather than the prosecutor having to prove that they did. If a licence holder is convicted of supplying alcohol to a minor, they can be fined $20,000 and their licence will be listed on a public ‘Minors Non-compliance Register’. Given the significant level of harm that early drinking can do to young people, these changes in the new drinking laws are steps in the right direction.

The very first change to come out of the review is that alcohol advertisements on public transport will be banned from mid-2017. The SA government has also recommended that individual councils consider banning alcohol advertising on bus shelters and other infrastructure. Changes to alcohol advertising during sports broadcasts may have to wait a bit longer, though. As expected, the SA government has noted that the exemption of sports broadcasts should be addressed at a federal level and has “…referred the recommendation to the relevant federal minister”.

Alcohol advertising changes are happening slowly, but they are happening! Limiting, or banning, alcohol advertisements that are likely to be viewed by minors will continue to be a key component in reducing the number of young people choosing to drink.

The current restrictions on trading hours for licensed premises, including the 3am ‘lockout’, will remain. For pubs and clubs that trade late at night, the new drinking laws will impose a mandatory ‘break in trade’ for at least 3 continuous hours between 3am and 8am.

Pubs and clubs are not the only places that will see a change in trading hours. Currently, bottle shops are required to close at 10pm but can apply for an extension to midnight if they are attached to a hotel. The new drinking laws will remove the option for an extension to midnight. Bottle shops that already have the approval to trade until midnight will keep their approval but all new bottle shops will close at 10pm.

The changes to SA’s drinking laws are some very positive steps in the right direction. Through our work with young people in our Party Safe Education™, Schoolies Operation, and Hindley Street programs, we see the harm that can come from alcohol. The new drinking laws will make the community safer and reduce alcohol-related harm, particularly for young people. That is, and will always be a positive thing!

Find out more about Encounter Youth.

What is the best hangover cure? Party Safe Checklist for Parents