Menu
Home » Schoolies Festival™ » Could the ‘Battle of the Schoolies DJ’s’ comp launch your music career?

Could the ‘Battle of the Schoolies DJ’s’ comp launch your music career? 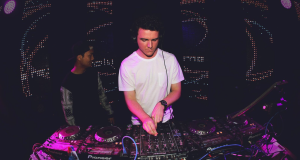 Can you imagine how it would feel to DJ in front of your mates and thousands of other school leavers at one of South Australia’s biggest celebrations of the year? Callum Reid can. Callum was in the graduating class of 2014 when he entered the ‘Battle of the Schoolies DJ’s’ competition. He was selected as one of the winners and had the chance to play a 30 minute set on the ‘Music Bowl’ stage – an open air venue where his peers partied to his beats under the stars. What a way to launch your music career!

We got in touch with Callum to find out a bit about how it all went down at Victor Harbor in 2014 and where the music world has taken him since.

Q: Tell us about your experience DJ’ing at Schoolies Festival™ 2014

A: Having already DJ’d for about 3 years, I thought it’d be worth a shot to enter into the Battle of the Schoolies DJ’s competition and just hope for the best. I didn’t ever think I would be lucky enough to win, but sure enough, I was selected as one of the winners and was granted the opportunity to play on the main outdoor stage on the Sunday night of the Festival! With a number of my friends working as a part of the Green Team as well as my peers dancing in the crowd, I can safely say that this will always be one of my favourite moments as a DJ – the sheer joy of being on that stage in front of my friends was truly indescribable!

Q: What was your next opportunity and how did it come about?

A: On the back of graduating from high school, I was first given the opportunity to play in town on a Thursday night amongst a roster of young, talented DJ’s at The London Tavern. Upon application to play at the venue, they wanted evidence of my DJ’ing ability, and so I shared both my winning entry into the 2014 Schoolies DJ Competition and a recording of my set from the actual Festival. This granted me my first club gig, and then through my performance on my trial night, Shannon Welk (DJ Sneaky Beats from Disco City Sounds) was so impressed that he asked me back to be a rotating resident DJ. I have now been a resident for over a year and am incredibly thankful for all of the opportunities that this venue and its crew have given me.

Q: We’ve heard you’ve been pretty busy this year in particular, what else has come your way?

A: Other venues that I have played at within the last year include HQ Complex, Black Bull, Hacienda (formally Apple Bar) and The Austral. I have also been given the opportunity to play at a variety of different events through the Fresh 92.7 Book A DJ service (as I became a member at the station during 2014). This includes playing at the annual Flinders University Student Association (FUSA) ball, Flinders University Open Days, Adelaide City Council gigs, Adelaide Fringe associated events (such as ‘Live From Tandanya’) – the list goes on!

Also, after getting back from Europe at the start of the year, I jumped straight into playing at the Ben & Jerry’s Open Air Cinema down at Glenelg. I did this gig almost every night for almost 2 months straight and it is still to this day one of the best events I’ve ever been a part of – food, drinks, ice cream, movies, great staff, great vibes, and that beautiful Glenelg sunset… What more could you want!?

Q: And now you’re on radio for all of us to listen to regularly?

A: I currently host my own show on Fresh 92.7 from 12-2am on Saturday nights called “The Vibe”. This is an amazing opportunity for me to play all of my favourite songs to a huge audience every single weekend. It’s also an opportunity for me to engage with Fresh’s audience just before they hit the clubs on their Saturday night, utilising Snapchat and the text line to read out everyone’s shout outs.

For the last year, I have also been producing another radio show on Fresh 92.7 – The Kitchen, Tuesday nights from 6-8pm. The show is hosted by the incredibly talented TXNK who is an absolute pleasure to work with! Her commitment to her craft is truly inspiring, and it’s always a great time in the studio whenever she’s around!

Launch your music career through ‘Battle of the Schoolies DJ’s’!

Thanks Callum for taking some time out of your excitingly busy schedule to share about where it all started and what you’ve been up to.

If you are a school leaver this year that is looking at the opportunities that Callum has encountered and wishing you were in his position, why not give it a crack? Enter the Battle of the Schoolies DJ’s for your chance to win a set under the stars! Head on over to our Schoolies Festival™ competitions page now.

Encounter Youth is a positive influence on young people in the community. As a not-for-profit charitable organisation, Encounter Youth provides direct relief to young people facing serious social challenges. We achieve this by working collaboratively with the community and providing effective programs, professional management of volunteers and engaging education.

Schoolies Travel: How to Make the Most of it!